I posted last week that we went to a luncheon honoring and inducting our son David into the Florida Wrestling Legends for his work as a ring announcer. It is not common for a ring announcer to be so honored, but David was not your run of the mill announcer.

Thanks to all of you for your warm congratulatory wishes—far more than I get for my "profound" political punditry.
What I failed to share was that David was hooked on professional wrestling at a young age watching it on TV whenever he could. In his speech, he acknowledged my taking him to matches in Ft. Lauderdale, Miami and even Wreslemania twice in Atlantic City. He was quick to mention that I read Time Magazine, while he took in the show.

Now, being the announcer in a tux in the center of the ring may seem like a cushy job, until you factor in being on the road 25 out of 30 days a month with 2 young sons back home in Georgia.
Then again, as can be seen in the following video, there were some pretty rough times too. Kurt Angle went a little berserk and a lot off script as he pummeled David. Andre the giant lifted him like a barbell and twirled him around on his shoulders before hurling him to the mat. And Chris Jericho ripped off David's tux in the ring for no reason I know.

The pic post Angle's angle shows the damage done, and obviously this is not "fake news."

But I think if you asked David he would say, "It hurt like heck for a long time, BUT I was in the biz and that mattered a great deal. My teen idols became my adult friends and I was in the ring and on TV every Monday and Thursday. I was very lucky to be able to live my dream and I would do it again in a rapid heartbeat, though I think I would skip the beatings! Then again maybe not." 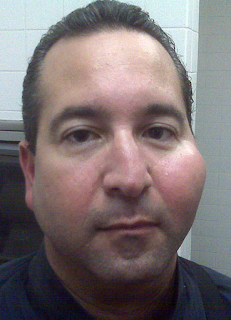 Offering Realistic Optimism for Our Times