THERE ARE STILL GOOD PEOPLE IN THE WORLD

In fact, most of us qualify!

A retired Brazilian bricklayer rescued an oil-covered penguin off the coast of Rio de Janeiro in 2011, Joao spent a week cleaning and feeding the starving Magellanic penguin who disappeared in February, only to return in June to reunite with his rescuer.

This pattern has repeated every year since then. The penguin leaves in February to mate and molt and returns in June to reunite with his friend Joao. With each visit their bond grows stronger. Joao said, "I love the penguin like it's my own child and I believe the penguin loves me."

I dedicate this sweet story to Sadie, my mom, who loved penguins her whole life and whose penguin collection sits dormant in boxes in my garage. The pic below is when she finally got to hold a penguin at Tampa zoo with her grandsons who are now 21 and 19. 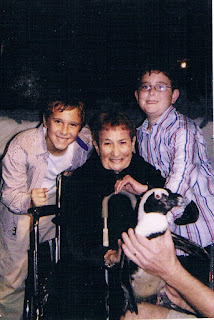 Posted by Unknown at 1:13 PM No comments:

FOR EVERY YIN THERE IS A YANG

Without going into a long dissertation, my heart goes out to those killed and maimed in Belgium today, those similarly attacked in France and California, and those majority of Muslims who are good people, but whose images are being seriously tainted by the few misguided rotten apples.

Prayers to all the good Yins and Yangs who stand for peace, honor, respect, and safety for all.

Bill
Posted by Unknown at 7:27 PM No comments:

I wrote about the migrant crisis and how the world needed to step in and manage this much better than it was doing. Seven months later I have seen countless tragedies among millions of mass migraters, a totally flummoxed Europe, and no clear plan or leadership.

I have read about the deal with Turkey, which is beyond my understanding. Best as I can tell they get perks for accepting migrants back and shipping them back on sort of a one for one something or other.

Merkel has lost much stroke re her open Europe doors policy, while the individuals and families caught in this quagmire are living under devastating conditions. Several countries just shut their borders when they were overwhelmed with the numbers of people who needed food, clothing, shelter, jobs, language classes, and lessons in not to grope women.

And, I don't think we come close to seeing the whole rotten picture but for an occasional headline or ugly picture. Where, I wonder, is the UN in all of this? Who is leading the European Union and what plans lie ahead to rescue millions of people from harms way?

As we listen to the presidential politicians pontificate, where is America in all of this? Though we rail about human rights in many places, why have these innocent victims of war and terrorism been left without any rights at all? Turning a blind eye to all of this, will come back to bite our country and our world in many ways. Mark my words, for they are true.

IT IS NOW TIME

to compare your answers as to which are the top 5 Healthiest States in America that I asked you to predict yesterday. Here they are:

50. Louisiana       Let's hear it for Bourbon Street and the great chefs there!

Bill
Posted by Unknown at 10:39 PM No comments:

as to how healthy they were. Guess at the top 5.

Bill
Posted by Unknown at 10:37 PM No comments:

that many are Obama bashers BUT, I thought the speech he gave this morning about Justice Garland was excellent, covering all of the bases and was heartfelt. He didn't seem to be reading from a teleprompter either.

Of course his plea "to be fair" will fall on deaf political ears because it is undeniable that politicos are anything but. But it would be nice if our politicians truly represented what's best for this country over what's best for their party or themselves.

In my limited knowledge-based view, Merrick Garland has earned his spot on the SCOTUS, and would contribute to it in ways with which Justice Scalia would be comfortable.


Bill
Posted by Unknown at 3:08 PM No comments:

2 QUOTES I JUST DON'T AGREE WITH

I believe that when our "pride bank" is full we can enjoy true confidence, self-esteem, and a positive sense of self-worth. In some cases, think The Donald here, when pride banks are bankrupt delusions of grandeur set in creating a braggart and a buffoon. A sense of inferiority is the mother of rage not confidence.


"Life hasn't much to offer except youth, and I suppose for older people, the love of youth in others."

He must have been depressed or drunk when he wrote this misguided statement. With age comes maturity, wisdom, and common sense all of which are often cast aside by the young.

Bill
Posted by Unknown at 8:09 PM No comments:

As we know, not all Americans are smart, but even the "undereducated" need to be aware of what this marketing genius, despite so many biz failures, is doing. He is taping into the angst and rage of so many who have not been treated well, but make no mistake, he will not treat us well and the world will shudder and could collapse under his formidable weight.

This election is not a reality TV show. This is our country. This is our future.  This is our children and grand children's lives. This is not the direction our leadership needs to go. This is a disaster waiting to happen. This, my friends, is serious shit.

Bill
Posted by Unknown at 8:15 PM No comments:

AS YOU KNOW FROM PRIOR POSTS

I am not enthralled with any of the candidates for President of the USA.

However, I am impressed with their stamina and work ethic. The campaign trail is not easy and they have traipsed the country doggedly morning, noon, and night.

They really want this impossible job and I so wish one was qualified to have it. But try as they might there is not a Commander in Chief among the six remaining.

Offering Realistic Optimism for Our Times